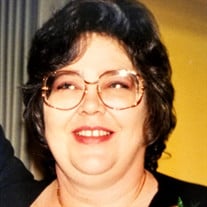 Janice Lee Tomlin, 71, of Little River, KS and formerly of Hutchinson, KS and McPherson, KS, went to be with the Lord peacefully on Sunday, June 9, 2019, at Harry Hynes Memorial Hospice Center, Wichita, KS after a brave four month hospitalization with lung issues and discovering she had a rare lung cancer. Jan and her husband, Bill, owned the donut shop within Welles Department Store in Hutchinson and a few other local businesses. She was also employed at the Dillons Central Bakery. Many years were spent as a homemaker perfecting many well know dishes along with lots of fishing, reading, sewing and living the city farm life. Her passion for the medical world later called her to become a medical lab tech for Hertzler Clinic, Halstead Hospital, and McPherson Hospital. Janice was born on April 28, 1948, in McPherson, KS, the daughter of Richard A. and Margery L. (Golladay) Hall. She was united in marriage to William “Bill” H. Tomlin in Hutchinson, KS. He preceded her in death on January 11, 1989. She graduated early from McPherson High School and continued her education at Adela Hale Business School, Hutchinson. She graduated from Hutchinson Community College and gained her Medical Lab Tech Certification. She was just one class away from completing her bachelor’s degree from Friends University, Wichita. She was a member of New Gottland Covenant Church, McPherson. Survivors include: her daughter, Angela Howdeshell (Justin) of Kechi, KS; son, Charles Tomlin of Little River, KS; three grandchildren, Brett Howie, Jacob Tomlin, and Carley Tomlin; two aunts, Lois Lamberson (Arthur) and Delores Haden; and many extended family members and friends. She was preceded in death by her parents and grandson, Colt Tomlin. A memorial service will be held at 10:30 AM, Saturday, June 22, 2019, at the New Gottland Covenant Church, 1700 Pawnee Rd., McPherson with Pastor Dan Parry officiating. Inurnment will be at a later date in Bean Cemetery, Little River. In lieu of flowers, memorial donations may be given to New Gottland Covenant Church or Sandstone Heights Nursing Home in care of Stockham Family Funeral Home, 205 North Chestnut, McPherson, KS 67460.

The family of Janice Lee Tomlin created this Life Tributes page to make it easy to share your memories.

Send flowers to the Tomlin family.