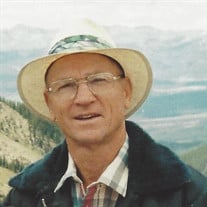 James F. (Jimmy/Jim) Nutter, 91, died Wednesday, June 27, 2018. He was born on February 22, 1927, in West Union, West Virginia to Chester & Gatha (Stutler) Nutter. His family moved to Galva, KS in 1929, and then to McPherson in 1934, where Jim was a standout athlete at McPherson High School, graduating in 1945. Jim was inducted into the McPherson High School Wall of Fame in 2000. Jim served his country by training as a medic for the U.S. Army before being deployed to Europe. The war in Europe ended as Jim arrived enabling him to compete in the G.I. Olympics at Berlin Stadium where his 400-meter relay team won, and to play on the Big Red One Army football team. Upon returning home, Jim attended Wichita University from 1947-1951, lettering in football, basketball, and through special permission both track and baseball. While playing football, Jim led the nation in rushing for a brief period of time. He was a charter inductee to the Wichita State University Shocker Sports Hall of Fame in 1979 for football where he holds or co-holds 18 school records. Jim earned a Bachelor’s Degree and later a Master’s Degree in Education. He spent most of his professional career teaching physical education and coaching basketball and track at Mayberry Junior High in Wichita, Kansas. Jim believed in helping people. Many times you could find Jim lending a ride home to players who needed help getting home from basketball practice. Jim married his life-long sweetheart, Venetta L. Linsenmayer, on May 29, 1949. They remained devoted to each other through 69 years of marriage, sharing many adventures together traveling across America in their pickup camper. Although both were in private rooms at Pinnacle Park Nursing Home, staff reported that they always managed to find each other in the commons and spend their days together, often holding hands or sharing a snack together. Jim had one son, Larry, a daughter in law, Johanna, and two grandchildren, Mackenzie and Lucas whom he enjoyed very much. Jim liked to garden, golf, and fish, often doing so with his brothers or with his father-in-law. Jim’s passion was collecting rocks and fossils. He and his family spent many summers traveling the country looking to add to his extensive collection. Jim devoted many hours of service to the Wichita Gem & Mineral Society and to the McPherson Gem & Mineral Club after Jim and Venetta moved to McPherson in 1992. Jim was a longtime member of Asbury United Methodist Church in Wichita. James is preceded in death by his parents Chester & Gatha Nutter, his brothers Clendon, Robert, Elbridge, Drexel, Stephen, Roland, Lloyd, and Edward. James is survived by a sister, Gatha Lingle of Hutchinson, KS; wife, Venetta Nutter of Salina, KS; a son and daughter-in-law, Larry & Johanna Nutter of Salina, KS; and two grandchildren, Mackenzie & Lucas of Salina, KS. Visitation will be held from 3:00 PM to 7:00 PM, Thursday, July 5, 2018, at Stockham Family Funeral Home with family receiving friends from 5:00 PM to 7:00 PM. The funeral service will be held at 10:00 AM, Friday, July 6, at Stockham Family Funeral Home with Pastor Lacey Wheeler officiating. Burial will follow at McPherson Cemetery. In lieu of flowers, memorial gifts may be made to the Fisher Center for Alzheimer’s Research Foundation in care of Stockham Family Funeral Home, 205 North Chestnut, McPherson, KS 67460.

The family of James F. Nutter created this Life Tributes page to make it easy to share your memories.

Send flowers to the Nutter family.