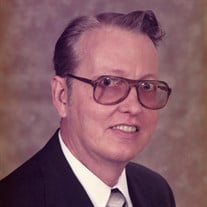 to view a livestream broadcast of the funeral service at 11:00 AM, Tuesday, Sept. 29, please click here: https://boxcast.tv/view/james-logbeck-funeral-service-v9cgpfufsmrqbmjjgr9v James Curtis Logbeck, known by most people as “Jim”, departed his earthly body on Saturday, September 19, 2020, and headed for his next destination. Jim believed in eternal salvation and believed in Jesus Christ as his personal Savior. Jim was born June 28, 1934, in McPherson, KS, the son of Vern and Helen Logbeck. As a youngster in McPherson, Jim’s first job was working as a shoe shine boy in the Warren Hotel, later working as a paper boy, delivering newspapers for the McPherson Daily Republican. He then worked at the concession stand at the Manor Theater where he also worked in the projection booth. He continued doing these jobs all the way through junior high school and high school. During his senior year in high school, Jim tied for 1st place in a statewide physics contest. After high school, Jim went to Kansas State University in Manhattan where he majored in electrical engineering. After his sophomore year, he went to work full time for a movie theater chain as a projectionist, manager, and later as a traveling sound engineer. Jim was drafted into the Army and served a total of six years, including his reserve time. He then returned to Kansas State University after a nine-year break, graduating in 1966 with a Bachelor of Science Degree in Electrical Engineering. His first job after college was working for Collins Radio Company in Richardson, TX. He worked with their high-power HF radio group as a junior engineer and accompanied six prototype transmitters to California, supervising the installation of three transmitters near Dixon, CA and three more near Delano, CA. He was in charge of about 20 technicians, numerous electricians, glazier’s and others from the local unions in California. The job took approximately two years, and each radio consumed 500,000 watts of electricity and took up about 10,000 square feet. Jim enjoyed his years in California and often visited his sister, Martha, in Alameda, CA. He also learned to fly and earned his pilot’s license during that time. Jim enjoyed flying a great deal. Collins Radio had a contract with the United States Army Signal Corps in Vietnam, and Jim volunteered to become a supervisor of that operation. He left for Saigon in March of 1968 and remained in Vietnam until March of 1971. While there, he ran Collins Radio operations and also had a desk at the First Signal Brigade Base at Long Binh. In this role, Jim travelled all over south Vietnam, often to remote locations to enable communications across the country for various military operations. He then travelled from the northern border of south Vietnam to an island in the South China Sea. He would be transported there by helicopter, command aircraft, or a C-130 tanker. To say this job was dangerous would be an understatement. Jim had numerous technical personnel under him and also hired about a dozen Vietnamese to work in the Saigon facility. Jim returned to the United States in March of 1973 and landed in the hospital with a pulmonary embolism. With his sister Martha’s help, he made a full recovery and returned to Dallas and worked as a microwave systems engineer. Jim then took a job in a supervisory position in Alaska where he and his team provided communications to various missile sites that protected the United States from an incoming attack. Jim spent five years in Alaska and enjoyed the fishing and made many friends. He returned to Dallas in October on 1978 and worked in logistics on a TACAMO upgrade project. TACAMO is a very low frequency transmitter used in submarine radio transmissions. The following years were spent in highly classified projects for various agencies and military organizations. Jim had operations in Puerto Rico, Panama, various South American countries, and Kuwait, wrapping up his career with a few projects in Australia. He had always wanted to retire at age 60 and in fact, was able to do so on his 60th birthday. In his retirement years, he returned to Alaska many times, as well as California and various other places. In Jim’s own words, “I had a good and exciting life!” Survivors include: two brothers, Frank Logbeck (Marilyn) of Rose Hill, KS and Delbert Logbeck of Fort Worth, TX; one sister, Martha Exline of Laguna Hills, CA; and dear friend, Oscar Newburn of Richardson, TX; and extended family and friends. He was preceded in death by his parents and two siblings, Sally Pattengill and Wayne Logbeck. The funeral service will be at 11:00 AM, Tuesday, September 29, 2020, at Stockham Family Funeral Home. Visitation will be held from 10:00 AM until service time on Tuesday, September 29, at the funeral home. To view a livestream broadcast of the service, please click on the following link: https://boxcast.tv/view/james-logbeck-funeral-service-v9cgpfufsmrqbmjjgr9v Burial with Military Honors will follow at New Gottland Lutheran Church Cemetery, McPherson. Memorial donations may be given to Kansas State University James Logbeck Scholarship Fund in care of Stockham Family Funeral Home, 205 North Chestnut, McPherson, KS 67460. Personal condolences may be sent to the family at www.stockhamfamily.com.

to view a livestream broadcast of the funeral service at 11:00 AM, Tuesday, Sept. 29, please click here: https://boxcast.tv/view/james-logbeck-funeral-service-v9cgpfufsmrqbmjjgr9v James Curtis Logbeck, known by most people as &#8220;Jim&#8221;,... View Obituary & Service Information

The family of James Curtis Logbeck created this Life Tributes page to make it easy to share your memories.

to view a livestream broadcast of the funeral service at 11:00...

Send flowers to the Logbeck family.