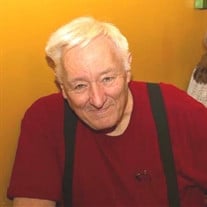 James “Jim” Andrew Jacobson, 77, of Salina, KS and formerly of McPherson, KS and Marquette, KS, passed away peacefully on Monday, February 5, 2018, at Salina Regional Health Center. Jim was a retired truck driver, working for Exide Battery, CertainTeed, Amax Aluminum, and Rail Car America. While living in Marquette, he and his wife owned Jakes Place for many years. Jim was a United States Army Veteran and was a member of the American Legion. Jim was born on July 8, 1940, in McPherson, KS, the son of James “Fred” Frederick and Madeline “Madge” E. (Williams) Jacobson. He graduated from Roxbury High School. On December 23, 1971, he was united in marriage to Evelyn M. (Butcher) Erickson in McPherson, KS. Survivors include: his wife, Evelyn of the home; children, Cheryl Miller (Tom) of Salina, KS, Kenny Erickson (Juanita) of Neodesha, KS, Jerry Erickson of McPherson, KS, and Janell Jacobson of Salina, KS; 13 grandchildren; and ten great-grandchildren. He was preceded in death by his parents. The memorial service will be held at 2:00 PM, Friday, February 9, 2018, at Stockham Family Funeral Home, McPherson. Memorial donations may be given to the American Diabetes Association in care of Stockham Family Funeral Home, 205 North Chestnut, McPherson, KS 67460.

The family of James A. Jacobson created this Life Tributes page to make it easy to share your memories.

Send flowers to the Jacobson family.