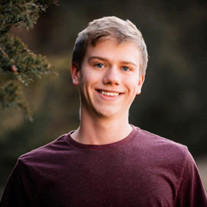 Jackson Cole Schrader passed away September 28, 2021. He was born February 1, 2002, in Salina, Kansas to Matthew and Ami (Parker) Schrader. He attended McPherson, Kansas public schools and graduated as valedictorian of his class in 2020. Jackson was a compassionate, funny and intelligent son, brother, and friend who will be missed greatly by those who knew and loved him. He was musically gifted and played the saxophone in the marching and symphonic bands. He played the guitar in jazz band and in the pit orchestra for high school musicals. He also performed in many guitar recitals for the Kennedy Guitar Studio and was a member of a guitar trio that won their category in the Oklahoma City Guitar Festival in 2018. Jackson played tennis in high school and was part of the undefeated 2018 state championship team. He and his partner, Rhett Edmonson, placed 10th in doubles and that placement helped clinch the state title. He also participated in cross country and soccer. Jackson had the goal of becoming a psychiatrist and attended his freshman year of college at Kansas State University then transferred in the Fall of 2021 to begin his sophomore year at Case Western Reserve University in Cleveland, Ohio. He was drawn to Case Western by its cultural and academic opportunities and left a positive imprint on other students and faculty in his short time there. Jackson was a member of the First United Methodist Church of McPherson and played guitar regularly with the praise band for years. He also attended youth group and participated in the church’s SERVE days focused on community service. Jackson truly loved his two dogs, Tucker and Jet, and enjoyed spending time with them. Jackson is survived by his parents, Matthew and Ami Schrader of McPherson, Kansas and his brother, Nolan Schrader of Newton, Kansas. He was preceded in death by his paternal grandparents. The visitation will be held at the First United Methodist Church of McPherson on Tuesday, October 5th from 5:00 – 7:00 p.m. The funeral service will take place at 10:00 a.m. on Wednesday, October 6th at the church. Burial will follow at McPherson Cemetery. To view a live stream broadcast of the service, please click on the following link: https://www.youtube.com/channel/UC5cflDseXQI-X9a0PFSMh0Q/featured Memorial contributions may be made to Kennedy Guitar Ensemble in care of Stockham Family Funeral Home, 205 North Chestnut, McPherson, KS 67460.

Jackson Cole Schrader passed away September 28, 2021. He was born February 1, 2002, in Salina, Kansas to Matthew and Ami (Parker) Schrader. He attended McPherson, Kansas public schools and graduated as valedictorian of his class in 2020. Jackson... View Obituary & Service Information

The family of Jackson Cole Schrader created this Life Tributes page to make it easy to share your memories.

Send flowers to the Schrader family.