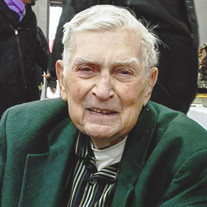 To participate in the memorial service via livestream at 4:00 PM on Saturday, click on the following link: https://www.facebook.com/First-United-Methodist-Church-McPherson-350427298040/ Gerald “Jerry” W. Ryan, age 90, passed away, Tuesday, May 26, 2020, at his home in McPherson. Jerry was born in Jerseyville, IL on January 28, 1930, to James and Aline Ryan, the only boy of five children. Jerry graduated from high school in Delavan, IL at the age of 16. He enlisted in the United States Army and was stationed in Korea. After his discharge, Jerry received a chemical engineer degree from the University of Illinois. Jerry began his career with UOP in Chicago and then spent the rest of his working years as a Process Engineer at the NCRA Refinery in McPherson, “retiring” in 1993. However, he stayed on in the capacity of consultant until he was 80. Jerry was an integral part of the expansion of the refinery and was highly regarded by his co-workers. As passionate as Jerry was about work, he was also passionate about fishing. Jerry enjoyed fishing. Whether it was in the rivers, lakes, farm ponds, or the Rocky Mountains, he enjoyed it all. Jerry was a 57 year member of AA (Alcoholics Anonymous). Over the years, Jerry mentored countless people. He continued until his death to explore various treatments for addiction. He was a member of the First United Methodist Church and the McPherson USD 418 School Board. He was also a life member of the American Legion Post #24 and served on the board of the Central Kansas Foundation. Jerry is survived by his wife of 56 years, Joyce of the home; six children, Amy Stewart (Dave) of Overland Park, KS, John Ryan (Darline) of Birmingham, AL, Jon Appleby (Mary) of Overland Park, KS, Leann McWhorter (Bob) of Pekin, IL, Steven Ryan of Salina, KS, and Terry Crosier (Steve) of Arvada, CO; a sister, Frances Flexsenhar of Pekin, IL; 13 grandchildren; three great-grandchildren; and many extended family and friends. He was preceded in death by his parents and three sisters. A memorial service will be held at 4:00 PM on Saturday, May 30, 2020, at First United Methodist Church with Rev. Emily Spearman Cannon officiating. A private burial will precede the service at McPherson Cemetery. To participate in the service via livestream, click on the following link: https://www.facebook.com/First-United-Methodist-Church-McPherson-350427298040/ Memorial donations may be given to SOS of McPherson or CKF Addiction Treatment, Salina in care of Stockham Family Funeral Home, 205 North Chestnut, McPherson, KS 67460.

The family of Gerald W. Ryan created this Life Tributes page to make it easy to share your memories.

To participate in the memorial service via livestream at 4:00...

Send flowers to the Ryan family.