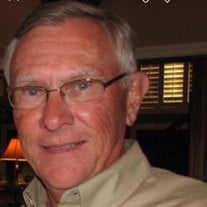 Gail Dean Menard was born on August 27, 1939, in Concordia, Kansas to John Julian Menard and Regina Bernadette Marcotte. Gail had two siblings, an older brother Donald Menard, and a younger brother Gary Menard who preceded him in death in 2011. Gail was blessed in a 50 year union with the late Carolyn LeBlanc in Clyde, Kansas and from that marriage had four children. The first of their children was a son, Galen born in Concordia, Kansas. After a move to Clay Center, Kansas, the addition of two daughters, Lori and Lisa, further enriched their lives and family. Lori preceded him in death in 2018. In 1961, the family relocated to McPherson and later added another daughter, Lana. Gail enjoyed employment in the insurance business, as a radio announcer, and then as a salesman for McPherson Business Machines. He would later become General Manager and owner of this business. Later in life, Gail sold his business and returned to radio as an Account Executive for Radio Kansas. In 2007, Gail joined in marriage to Ila Fae Mackey in Oklahoma City. This union brought Gail so much happiness and enabled him to continue his love of travel, taking them coast to coast and on several cruises. His life was also enriched by adding Ila’s adult children and grandchildren. They made their home in Owasso, Oklahoma before moving to Silver Arrow Independent Living in Broken Arrow, Oklahoma due to Gail’s health condition. Gail’s love for the Lord made music and bible teaching an important part of his life. Not only was he a member of many church choirs through the years, his love of music would lead him to helping orchestrate a group called SGM which promoted Southern Gospel Music groups to perform in McPherson. Other interests were playing golf, astronomy, cards, and watching sports. But playing the card game Pitch is what brought out his competitive side. Better known as Ampa and Papa, Gail was especially proud of his nine grandchildren: Lindsey (Matthew), Josh (Rachelle), Tara (Hugh), Sydney (Josh), Jason (Heidi), Sara (Jake), Jared (Karissa), Clarissa, and Emily (Kendall). There were numerous trips to the park, Dairy Queen, and was he always willing to play a game at the house. Gail never missed a single graduation or wedding, and he loved visiting and hearing about each of their interests. Gail thought of his children’s spouses as his own. Rhonda Menard, Park Estes, Kevin Fenimore and Ila’s children, Melody Mills (Steve), Mike Mackey (Angela), Mark Mackey (Belinda) and Monte Mackey were all loved and important parts of his life. Gail entered peacefully into eternal rest on Tuesday, July 6, 2021, surrounded by family at his home in Broken Arrow, OK. He was eighty-one. The funeral service will be held at 11:00 AM, Thursday, July 15, 2021, at the McPherson Free Methodist Church with Pastor Jared Menard officiating. Family will receive friends from 10:00 AM until service time, Thursday, at the church. A private graveside service will be held at the McPherson Cemetery. To view a livestream broadcast of the memorial service, please click here: https://macfmc.online.church/ Memorial donations may be given to the American Bible Society in care of Stockham Family Funeral Home, 205 North Chestnut, McPherson, KS 67460.

Gail Dean Menard was born on August 27, 1939, in Concordia, Kansas to John Julian Menard and Regina Bernadette Marcotte. Gail had two siblings, an older brother Donald Menard, and a younger brother Gary Menard who preceded him in death in 2011.... View Obituary & Service Information

The family of Gail D. Menard created this Life Tributes page to make it easy to share your memories.

Send flowers to the Menard family.