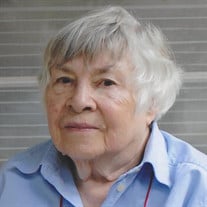 Evelyn Arlene (Akers) Whitfield passed away January 2, 2018. She was born on April 1, 1927, to Jacob V and Ruth (Walking) Akers in Topeka, Kansas. She was the only child of two Depression Era parents who gave her a loving home, an introduction to business, her first of many pets, a love of reading, a belief in the practice of kindness and also encouraged her independent nature. Evelyn enjoyed lifelong friendships with her Kansas City, Burlington and Richfield, Kansas cousins, aunts and uncles. She graduated from Topeka High School and attended Washburn University and K-State before marrying her high school sweetheart, John Whitfield in 1947. She and John had two children, Susan and Janice. Evelyn worked for Blue Cross and Blue Shield from 1948 to 1951 and later for Kansas State Teachers Association. In 1968 she began working as full-time business manager of John's art studio. In 1985, she and John moved the studio and residence from Topeka to Lindsborg where they spent several years renovating the Anna Olsen house which was built in the 1880's. Although Evelyn was initially very reluctant to move to Lindsborg, she soon was so happy with their home and her life in Lindsborg that she often said she did not want to leave the town, even for short times. After John's death in 2011, she focused much of her attention on their home, pets, family, and keeping up with neighbors and other friends. Evelyn will be forever missed by those who loved her dearly. She is survived by her daughter, Susan Whitfield and (son-in-law) David Harding of Lindsborg; brother-in-law, William (Bill) Whitfield and his wife, Kay, of San Bernardino, CA; cousin, Mary Tierney Simmons of Topeka; two beloved dogs, Molly and Andy; three grandcats; and dear friends in Lindsborg and Topeka. Private services will be held at a later time. Memorial donations may be given to Kindred Hospice, Bethany Home, McPherson County Humane Society, or charity of the donor’s choice, in care of Stockham Family Funeral Home, 205 North Chestnut Street, McPherson, KS 67460.

Evelyn Arlene (Akers) Whitfield passed away January 2, 2018. She was born on April 1, 1927, to Jacob V and Ruth (Walking) Akers in Topeka, Kansas. She was the only child of two Depression Era parents who gave her a loving home, an introduction... View Obituary & Service Information

The family of Evelyn A. Whitfield created this Life Tributes page to make it easy to share your memories.

Send flowers to the Whitfield family.