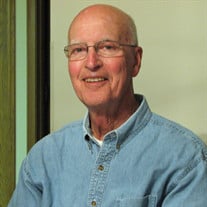 E. Dean Reynolds, 85, of McPherson, KS, passed away peacefully on Wednesday, July 5, 2017, surrounded by family at Hospice House, Hutchinson. Dean retired from McPherson College where he was the Registrar, Business Manager, and Maintenance Supervisor. He was also a trust officer at Peoples Bank. Dean was born on November 3, 1931, in Ankeny, Iowa, the son of George Fred and Iva Mae “Harris” Reynolds. On September 16, 1953, Dean was united in marriage to Madonna J. Miller in rural Ankeny, IA. He then enrolled at McPherson College and graduated from there in 1957. He was a member of McPherson Church of the Brethren where he served as the church organist for many years. He was also a member of Rotary International. Dean was a good father and grandfather, offering advice and wisdom if asked. Following retirement, he took up bicycling which proved to be a very enjoyable pastime for him. Survivors include: his loving wife of 63 years, Madonna of the home; son, Brian Reynolds and wife, Kristen, of McPherson, KS; son-in-law, Gary French of Cincinnati, OH; sister, Betty Romick of Alleman, IA; four grandchildren, Dan Reynolds of McPherson, KS, Lindy Reynolds of McPherson, KS, Gregory French of Pittsburg, PA, and Amy French of Columbus, OH. He was preceded in death by: his parents; daughter, Brenda R. French; and brother, Fred Reynolds. The memorial service will be held at 10:30 AM, Friday, July 14, 2017, at McPherson Church of the Brethren with Rev. Chris Whitacre and Rev. Kathryn Whitacre officiating. A private inurnment will be held at McPherson Cemetery. Memorial donations may be given to McPherson Church of the Brethren or The Cedars in care of Stockham Family Funeral Home, 205 North Chestnut, McPherson, KS 67460.

The family of E. Dean Reynolds created this Life Tributes page to make it easy to share your memories.

Send flowers to the Reynolds family.