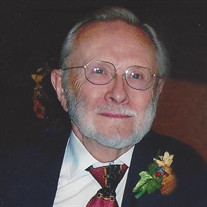 Duane Banman, 92, died quietly surrounded by the love of his family on Sunday morning, March 29, 2020, in McPherson, KS, after slipping away bit by bit for many years due to the effects of Alzheimer’s Disease. He was born in McPherson, Kansas on an All Schools Day, Friday, May 13, 1927, to Lina (Webb) and Samuel Banman. He entered the Navy immediately after graduating from McPherson High School in May 1945, and ultimately served in the Pacific. Duane began his career at the McPherson Sentinel (at the time the Daily Republican) while still in high school. After returning from his naval service, he re-joined the Sentinel as a linotype operator, ultimately retiring after many years as the production manager for his hometown newspaper. Following his marriage to Rita Sharpe, they raised their family in McPherson. Duane was active in the United Methodist Church and the VFW. He enjoyed boating, camping, fishing, and you would often find him tinkering in his garage because he could fix just about anything. In 1984, Duane married Bernice Hollingsworth. After retirement, they moved to Kimberling City, MO, where they lived for more than 25 years. Their time in Missouri was filled with a shared love of rescue dogs and various activities at their local United Methodist Church including mission trips to the Navajo Nation. They became active leaders in the Walk to Emmaus mission, serving as sponsors and speakers. Most holidays were spent in central Kansas with children, grandchildren, and great-grandchildren until they could no longer make the trip due to his Alzheimer’s. They moved back to McPherson in mid-2018 and he entered the Cedars a few months later. Duane is survived by his loving and devoted wife, Bernice; his daughters and their families, Terry and Bill Baldwin, McPherson, and Rane Baldwin and Morgan King, Ann Arbor, MI; Denise and Jim McDonald, Seattle, WA; Melea and David Oxley, Medicine Lodge, KS, and Jon Oxley and Gretta Determann, Tallahassee, FL; Lorri and Chris Gurnett, Thornton, CO, Sara Gurnett and Matthew Riecks, Denver, CO, Erin Gurnett and Tim Mullineaux, Lafayette, CO; Bernice’s children and their families, Paula and George Hoke, Buhler, KS; Pam Hardwick, Thornton, CO; Steve and Gemma Hollingsworth, Kimberling City, MO; Brad and Tish Hollingsworth, Topeka, KS; Kent and Connie Hollingsworth, Canton, KS; and 14 Hollingsworth grandchildren and 22 great grandchildren. He was preceded in death by his parents and a brother, Wilbur. A memorial service will be held at a later date. In lieu of flowers, a donation can be made in his honor to the Kimberling City United Methodist Church, https://www.kcumc.net, or The Cedars, https://thecedars.org or sent to Stockham Family Funeral Home, 205 North Chestnut, McPherson, KS 67460.

Duane Banman, 92, died quietly surrounded by the love of his family on Sunday morning, March 29, 2020, in McPherson, KS, after slipping away bit by bit for many years due to the effects of Alzheimer&#8217;s Disease. He was born in McPherson,... View Obituary & Service Information

The family of Duane Banman created this Life Tributes page to make it easy to share your memories.

Duane Banman, 92, died quietly surrounded by the love of his...

Send flowers to the Banman family.