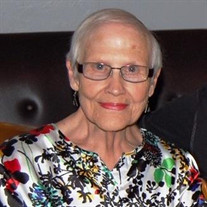 She could shottish, hambo, waltz and boogie with the best of them. With music in her veins she sang in the church choir, harmonizing with her father Einar and Uncle Sven, who sang in the Chicago Swedish men’s Chorus. She was a founding member of a kitchen band that played at rest homes and for parties bringing laughter wherever the merry band went. She loved singing in the Messiah Chorus, especially Bach’s Passion of Saint Matthew. Even with crippling arthritis she played the piano every year leading the family in Christmas carols. Away in a Manger was her favorite, and while her voice was still strong and pure her rendition of Oh Holy Night will forever resonate in her children’s hearts. Her tenacious need to solve problems made her an excellent book keeper and office manager for a big insurance firm in Chicago. She was highly valued for her strong work ethic and skill. Until she died, she made sure there was not the slightest discrepancy in her check book. This aptitude for figures made her an indomitable card player. In double pinochle she could recall every card that had been played and often knew who was holding the last ace of trump. Her parents, immigrants from Sweden, Einar and Olga Johnson, raised her in the rich Swedish culture of Chicago. She was crowned the Mid-Summer’s Queen in 1946. Like her father, she enjoyed traveling. Sweden was her favorite destination. She met Vivian Justus Nelson while attending Bethany College in Lindsborg, KS as a music major. It didn’t take long for her to know that she had met the man she would devote her life to. They formed an enduring partnership that promoted an equality between man and wife seldom seen in the 50’s and 60’s forming a great team. Somehow, she convinced dad, who had two left feet, to take square dance lessons. They enjoyed Do-Si-doing around the Chicago metro area. She believed her greatest achievement in life was her three children: Michael, Debra and Donna. Dedicated to serving others she was always there for her twin sister, Dorothy, her much younger brother, Stanley, and her family providing tender care. She had a keen eye for quality which made her an outstanding cook. She could tell the butcher how to cut a roast the precise way she needed. While her body allowed, she tended a beautiful garden. She taught her children, grandchildren and great-grandchildren to do things well, how to get it right and how to find the ideal place for everything. We all are still learning. Her passion for mysteries began as a child with reading Nancy Drew. Almost every mystery at the local library has her initials inside its cover. In the last days of her life she asked her children, “Have you solved the mystery yet.” We said, “No,’ and we asked “Have you?” She replied, “It’s all right here.” On Tuesday, October 29th she laid down her sweet head and died in peace with love surrounding her. She will stay close to her family forever. She is survived by a son, Michael Nelson (Chuck) of Alma, KS; two daughters, Debra Nelson (Dee) of Lawrence, KS and Donna Becker (George) of McPherson, KS; a brother, Stanley Johnson (Lenore) of Park Ridge, IL; two grandchildren, Justin Becker and Stacey Becker; three great-grandchildren, Justus, Sam, and Nora; and a number of nieces and nephews. In lieu of flowers, please make charitable donations to the Lindsborg Public Library and Hospice and Homecare of Reno County in care of Stockham Family Funeral Home, 205 North Chestnut, McPherson, KS 67460.

She could shottish, hambo, waltz and boogie with the best of them. With music in her veins she sang in the church choir, harmonizing with her father Einar and Uncle Sven, who sang in the Chicago Swedish men&#8217;s Chorus. She was a founding... View Obituary & Service Information

The family of Doris H. Nelson created this Life Tributes page to make it easy to share your memories.

She could shottish, hambo, waltz and boogie with the best of...

Send flowers to the Nelson family.