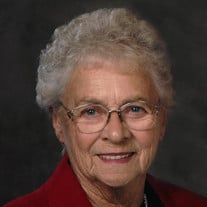 To view a livestream broadcast of the memorial service on Monday, July 13, at 10:30 AM, please click on the link below: https://boxcast.tv/view/donna-bacon-memorial-service-hhupufaztgp57olirokz Donna Belle Bacon, daughter of Irl L. and Sadie... View Obituary & Service Information

The family of Donna B. Bacon created this Life Tributes page to make it easy to share your memories.

To view a livestream broadcast of the memorial service on Monday,...

Send flowers to the Bacon family.