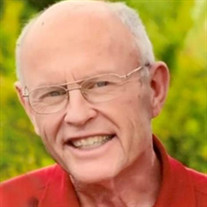 Donald Dean Sorenson, 72, of McPherson, KS passed away on October 26, 2021. He was a devoted husband, father, papa, brother, uncle, and friend. He raised his family in Holcomb, KS, residing there for almost 30 years before retiring, and returning to his childhood hometown of McPherson. Don was born July 9, 1949, to Chloris (Grout) and Maurice Sorenson. He grew up in McPherson where he graduated from high school in 1968. He was part of the MHS basketball team, where his adoration of Bullpup basketball and the Roundhouse began. He continued his education at Emporia State University and graduated with a Business Degree. He also attended Central Christian College, McPherson. Throughout his childhood, ‘Donnie’ spent much of his time at his family’s business, United Dairies, where he delivered milk to the residents and businesses of McPherson. His love for dairy and ice cream led him to his soon-to-be wife, Cora, as they first met at Dairy Queen, where she was working. They began dating and later were married on June 8, 1974. After uniting in marriage, they moved to southwest Kansas and began growing their family. Don worked in the oil and gas industry for almost 30 years, but his true passion was found in his family. He was a volunteer coach for many youth sports teams. He found great joy in watching his own children participate in athletics and extra-curricular activities. Don’s grandchildren knew that their Papa always kept his freezer stocked with ice cream— usually with his favorite treat, drumsticks. Survivors include four children, Kami VanCampen (Eric) of McPherson, KS, Kelly Sorenson (Annie) of McPherson, KS, Kelsie Jusko (Eric) of McPherson, KS, and Keaton Sorenson of McPherson, KS; brothers, Lynn Sorenson (Joyce) of Bonner Springs, KS, and Gayle Sorenson of Houston, TX; eight grandchildren including Parker, Paisley, and Piper VanCampen, Cooper and Boston Sorenson, Landri and Tripp Jusko, Lanay Grothen; and many nieces and nephews. Don is preceded in death by his beloved wife, Cora Sorenson, parents, Maurice and Chloris Sorenson, and brother, David Sorenson. Don's family will have a Come and Go reception for friends and family on Wednesday, November 3rd from 1:00 PM to 3:00 PM at The Cedars Wellness Center in McPherson. Memorial donations may be given to the Don and Cora Sorenson Memorial Fund in care of Stockham Family Funeral home, 205 N. Chestnut, McPherson KS, 67460.

Donald Dean Sorenson, 72, of McPherson, KS passed away on October 26, 2021. He was a devoted husband, father, papa, brother, uncle, and friend. He raised his family in Holcomb, KS, residing there for almost 30 years before retiring, and returning... View Obituary & Service Information

The family of Donald Dean Sorenson created this Life Tributes page to make it easy to share your memories.

Donald Dean Sorenson, 72, of McPherson, KS passed away on October...

Send flowers to the Sorenson family.