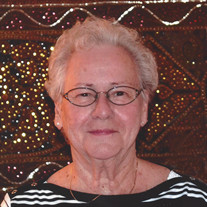 Dixie L. Koehn, 82, of Galva, KS, passed away peacefully on Friday, September 28, 2018, surrounded by family at McPherson Hospital. She was a homemaker and lunch cook at the Galva schools. Dixie was born on December 6, 1935, in Udall, KS, the daughter of Theodore Roosevelt and Glenore (Frost) Crouse. She graduated from Galva High School in 1953. Dixie was united in marriage to Claude W. Koehn on June 12, 1953, in Galva, KS. She was a member of Galva United Methodist Church. Survivors include: her husband, Claude of the home; four children, Pat Lorson (Don) of Galva, KS, Jim Koehn (Rhonda) of Galva, KS, Jack Koehn (Kathy) of Fremont Hills, MO, and Joe Koehn of Galva, KS; nine grandchildren, Derek Lorson (Sarah), Leah Inman, Jaime Smith (Bryon), Kylee Richardson (Ty), Megan Howard (RA), Allison Koehn, Bo Koehn (Kendra), Taylor Koehn, and MacKenzie Koehn; and 12 great-grandchildren. She was preceded in death by her parents, five brothers, and one sister. Dixie, and her husband Claude, loved to camp and travel. She and her family could be found most summer weekends at Kanopolis Lake. And every summer, they loaded up the family in their camper and ventured to places such as the Grand Canyon, Rocky Mountain National Park, Glacier National Park, and Disney World. These weren’t just vacations; these were excursions that sometimes lasted 4 to 5 weeks. These were some of the best family memories for Dixie. Dixie loved her family immensely and her children, grand-children, and great grand-children were her pride and joy. Holidays were extra special for her and she excelled at spoiling her family (especially her grand-children and great grand-children) at Christmas time. During the holiday meal preparation, God help anyone who tried to get in her kitchen; and good luck getting one of her special recipes! Dixie rarely missed a game that her kids were participating in. However, she would get so nervous that she would have to go out and walk the halls. She would then continuously ask friends and family how the game was going. Only with victory in hand, would she make her way back in the stands. Dixie was also a big Royals fan and always looked forward to the new season every spring. After retirement, she and Claude loved spending winters down in McAllen, Texas. Dixie would often host get togethers for all the friends her and Claude made when they were “winter Texans”. While down in Texas, Dixie continued to put her excellent cooking skills on display as she won several cooking contests including the grand champion award on several occasions. When they returned each spring, Dixie would have a little something for everyone in her family; the spoils of her efforts in the Mexican open-air shopping markets just across the border. While she will be missed greatly by her family and friends, she is already getting the camper ready. Visitation will be held from 3:00 PM to 7:00 PM, Tuesday, October 2, 2018, at Stockham Family Funeral Home with family receiving friends from 5:00 PM to 7:00 PM. The funeral service will be held at 10:30 AM, Wednesday, October 3, at Galva United Methodist Church with Rev. Mike Miller officiating. Burial will follow at Empire Cemetery, Galva. Memorial donations may be given to Galva United Methodist Church in care of Stockham Family Funeral Home, 205 North Chestnut, McPherson, KS 67460.

Dixie L. Koehn, 82, of Galva, KS, passed away peacefully on Friday, September 28, 2018, surrounded by family at McPherson Hospital. She was a homemaker and lunch cook at the Galva schools. Dixie was born on December 6, 1935, in Udall, KS,... View Obituary & Service Information

The family of Dixie L. Koehn created this Life Tributes page to make it easy to share your memories.

Send flowers to the Koehn family.