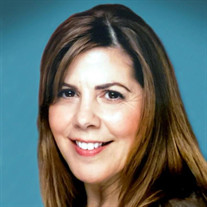 Diane Calcagno-Fallis passed peacefully on November 5th, 2021, after a hard battle with brain cancer at the age of 60. Her devoted husband of 24 years, Douglas, was by her side. Diane was born on January 2, 1961, in Summit, NJ; the second of three daughters to Charles M. Calcagno and Marion (Borgese) Calcagno. Diane lived her early childhood years in Kenilworth before the family relocated to Berkeley Heights, NJ. After graduating from Governor Livingston high school in 1979, she continued her education studying legal administration. Diane began her professional career at Lane M Ferdinand law firm in Springfield, NJ After relocating to Southern California, she continued to work as a legal administrator joining Snell & Wilmer law firm in Irvine, CA. Diane met Douglas, and they married in October 1997, settling in Irvine. Daniel, their son, was born in September 1998. In 2006, the family relocated to McPherson, Kansas, Douglas’ hometown. After arriving in Kansas, Diane took a position in advertising at the McPherson Sentinel, the local newspaper. After 5 years with the paper, through business contacts, Diane came upon what she considered to be her “dream job” working at the McPherson Opera House Company. She eventually became Executive Director of the opera house. Through these jobs, Diane made many lasting friendships. Diane had the support of many friends through the social activities she engaged in while in McPherson. Her dear Bunco Babes and her yearly trips with her three Cali coworkers were a big part of her life. One of her proudest moments was seeing her son, Daniel, graduate from Kansas State University in May 2021. She looked forward to annual trips to Ocean Beach III in N.J. to visit the Jersey shore. Diane loved the beach and collecting shells on the east coast and the west coast. Diane will be remembered as caring and compassionate. She would always listen and give support to anyone who talked with her. Diane's commitment and determination in life is a lasting inspiration and a shining light for all who knew her. Diane is survived by her husband, Douglas, her son, Daniel, her mother, Marion Calcagno, her sisters, Karen (Tom Ryan) Hodshon and Arlene (Tim) Lasecla, and many nieces and nephews. She is also survived by her mother-in-law, Joan Fallis, brother-in-law, David (Sindie) Fallis, and sister-in-law, Beth (Tom) Robinson. She was preceded in death by her father, Charles Calcagno, and father-in-law, Ken Fallis. A Celebration of Diane’s Life (come & go) will be held from 11:00 AM to 2:00 PM, Saturday, November 27, 2021, in The Grand Ballroom of the McPherson Opera House. In lieu of flowers, memorial donations may be made in Diane’s memory to the American Brain Tumor Association by visiting her personalized memorial contribution page at https://inmemof.org/diane-calcagno-fallis or by your donation in care of Stockham Family Funeral Home, 205 N. Chestnut, McPherson, KS 67460.

Diane Calcagno-Fallis passed peacefully on November 5th, 2021, after a hard battle with brain cancer at the age of 60. Her devoted husband of 24 years, Douglas, was by her side. Diane was born on January 2, 1961, in Summit, NJ; the second of... View Obituary & Service Information

The family of Diane Calcagno Fallis created this Life Tributes page to make it easy to share your memories.

Send flowers to the Fallis family.