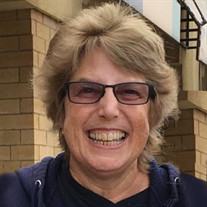 Deborah Sue Hoffman Wagoner, 62, of McPherson, KS, passed away peacefully on Tuesday, August 14, 2018, at the University of Kansas Medical Center in Kansas City, KS with her loving husband by her side. Deb was born September 20, 1955, in Chicago, IL, to Paul and Joan Hoffman. Two years later, the family moved to Detroit, MI, following Paul’s graduation from Bethany Theological Seminary, where he pastored the Trinity Church of the Brethren. Deb attended Kindergarten and 1st grades while in Detroit. In 1962, the family relocated to North Manchester, Indiana, where she completed her public schooling, graduating from Manchester High School. She was actively involved in her high school years with cheerleading and other athletic activities. Upon graduation, Deb attended Manchester College, graduating in 1977 with a degree in Psychology and Physical Education. She again was an active member of her college community. After graduation, she worked the next year as an admissions counselor for Manchester College. On September 9, 1978, she was united in marriage to John Wagoner at the McPherson Church of the Brethren. They spent their first months together at Bethany Theological Seminary in Oak Brook, IL. During the fall semester of 1978, she worked as a para-educator at a special needs school. January of 1979 found them moving to Abilene, KS, where Deb was a substitute teacher. John and Deb moved to McPherson, KS, for the summer of 1980, where Deb was taking math classes through McPherson College and Bethany College to become certified to teach secondary mathematics. In January 1980, they were called to the Northern Colorado Church of the Brethren as Coordinators of Ministry together. Deb also began her career as a teacher of mathematics at Valley High School in Gilcrest, CO. She taught at Franklin Middle School and John Evans Middle in Greeley, CO, and then taught at Platte Valley Middle and High School in Kersey, CO. The years in Colorado and as a part of the Northern Colorado Church fellowship were always remembered as some of the happiest years they had together. During their time in Colorado, John and Deb were blessed with four children: Anna in 1984, Elizabeth in 1986, Michael in 1990, and Steven in 1992. In June of 1993, they moved to McPherson, KS. She began a 19 year career teaching at Moundridge Middle School and High School until she retired from full-time teaching in 2011. She then worked as a para-educator at McPherson Middle School until her death. Deb absolutely loved teaching middle schoolers with, as she would say, their quirky personalities. Spending time with family and extended family was incredibly important to her. She spent endless hours in her garden, gazebo and reading side by side with John. And as those who knew her well can attest, she loved Christmas – REALLY loved Christmas!, cats, and collecting mugs. Despite living with a kidney disease for 40 years, overcoming breast cancer in 2016, and developing an auto-immune disease of the liver in 2015, one would never know just how ill she was when talking with her. Her vibrant smile, contagious laugh, positive attitude, gift of gab, and ability to welcome and involve everyone she met has left an incredible impression on all those she leaves behind. Deb’s membership and involvement with the Church of the Brethren was such an important part of her life, as she was always so involved with church youth groups and church camp (Camp Mack) during her growing up years. That continued with her work at the Northern Colorado Church of the Brethren and summers counseling at Camp Colorado, times she remembered with such fondness. Her belief in peace was at the forefront of her deep and abiding faith as she spent her last 25 years as a member of the McPherson Church of the Brethren. To say family was important to Deb would be an understatement. Family was always front and center in her life. Survivors include: husband, John of McPherson, KS; daughters, Anna (Hoyatte) Harris of Salina, KS and Elizabeth (Jeff) Krehbiel of Pratt, KS; sons, Michael Wagoner and Steven Wagoner both of Marion, KS; grandchildren, Sky Schriner, Jayce Schriner, Blayne Schriner, Baylee Schriner, Chloe Harris, Axtyn Harris, Matthew Krehbiel, Nathan Krehbiel, Laura Krehbiel, Nehemiah Wagoner, and Lyriq Bownes; parents, Paul and Joan Hoffman of McPherson, KS; brothers, Dan (Dawn) Hoffman of McPherson, KS, John (Sandy) Hoffman of McPherson, KS, and Jim (Lisa) Hoffman of Goessel, KS; parents-in-law, Paul and Mary Wagoner of McPherson, KS. She is also survived by many other in-laws: Jane Wagoner of Newton, KS, Alan (Deb) Wagoner, Bruce (Barb) Wagoner, and Ann (Dale) Jordan all of McPherson, KS, and Fran Wagoner of Salina, KS. There are also many nieces, nephews, grandnieces, grandnephews, aunts, uncles, and cousins who meant so much to Deb. The family will receive friends from 3:00 PM to 5:30 PM, Friday, September 28, 2018, at McPherson Church of the Brethren. A memorial service will be held at 11:00 AM, Saturday, September 29, at the McPherson Church of the Brethren with Revs. Chris and Kathryn Whitacre presiding. Private inurnment at McPherson Cemetery will precede the memorial service. To view a live webcast of the service, please click on this link: https://www.youtube.com/results?search_query=mcpherson+church+of+the+brethren In lieu of flowers, donations can be made to the Deborah Hoffman Wagoner Memorial Fund in care of Stockham Family Funeral Home, 205 N. Chestnut, McPherson, KS 67460.

Deborah Sue Hoffman Wagoner, 62, of McPherson, KS, passed away peacefully on Tuesday, August 14, 2018, at the University of Kansas Medical Center in Kansas City, KS with her loving husband by her side. Deb was born September 20, 1955, in Chicago,... View Obituary & Service Information

The family of Deborah Hoffman Wagoner created this Life Tributes page to make it easy to share your memories.

Send flowers to the Wagoner family.