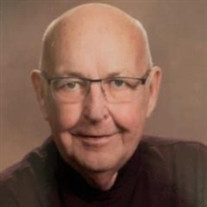 Dave Dahlsten, age 78, passed peacefully from this world on October 2, 2021. Dave was born on October 29, 1942, in Wichita, Kansas. He was the youngest of four children born to Clifford and Ruby Dahlsten. Dave was raised in Lindsborg, Kansas where he graduated from Lindsborg High School and attended Bethany College. On November 10, 1962, he married Charlotte Jaquiss. To this union were born their children, John and Michelle. Dave was employed in the plastics industry. Throughout his career, he created various extrusion processes, established and managed production facilities, and excelled in sales. He was an entrepreneur and inventor at heart. On August 3, 1989, Dave married Carol Schroeder and simultaneously expanded his family considerably with the addition of four step-children – Patsy, Jo, Beth, and Tim – and their families. Dave loved to travel and visited every continent except for Antarctica. He was an avid golfer and card shark. He loved a good joke, magic trick and lively conversation. He made friends instantly wherever he went. Dave had a generous spirit which blessed friends and strangers alike. Dave was preceded in death by his parents, Ruby and Clifford Dahlsten; his sisters, Esther Marie Jaderborg and Anita Thackery; and his step-son, Tim Schroeder. Dave is survived by his wife, Carol Schroeder Dahlsten; his children, John Dahlsten (Wende) and Michelle Dahlsten Kratofil (Dave); his grandsons Alex Kratofil and Aaron Kratofil; his brother, Ron Dahlsten (Sue); his step-children, Patsy Neef (Jim), Jo Littrell, and Beth Chalmers along with their eleven children and seventeen great-grandchildren; his nieces and nephews, extended family, and numerous friends and colleagues. A Celebration of Life will be held on Wednesday, November 24, 2021, from 5-7 pm at the American Legion in McPherson, Kansas. Memorials may be made to Heart of the Nation Catholic Mass or the McPherson County Food Bank in care of Stockham Family Funeral Home, 205 North Chestnut, McPherson, KS 67460.

Dave Dahlsten, age 78, passed peacefully from this world on October 2, 2021. Dave was born on October 29, 1942, in Wichita, Kansas. He was the youngest of four children born to Clifford and Ruby Dahlsten. Dave was raised in Lindsborg, Kansas... View Obituary & Service Information

The family of David Edward Dahlsten created this Life Tributes page to make it easy to share your memories.

Dave Dahlsten, age 78, passed peacefully from this world on October...

Send flowers to the Dahlsten family.