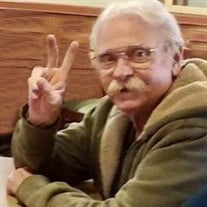 Dale Gene Frans, 74 of McPherson, KS, passed away on Tuesday, October 12, 2021, after a courageous 9 year battle with Pulmonary Fibrosis. Ever a feisty and surprising man, he refused to be defined by the disease, living an active life for nearly a decade after his diagnosis. Born to Ray and Lillian Frans on June 1, 1947, Dale grew up in McPherson, KS with his older sister Cheri and younger brother Dennis. He graduated from McPherson High School in 1965. Dale went on to serve his country with the United States Army in 1966. Stationed in Germany during the Vietnam War, he worked primarily in communications. After being honorably discharged, Dale returned to McPherson and began a career in flooring installation at Reggie’s Floor Covering. He later started Frans and Frans Installation with his brother Dennis, and continued to work in the industry throughout his life. A creative and adventurous man, Dale loved being outdoors; going camping, hiking, fishing, and searching for arrowheads. He had a green thumb, with a particular talent for cultivating wildflower gardens and cacti. Dale was an avid reader and enjoyed researching Native American history. He enjoyed putting together model airplanes, making his own arrowheads, and painting landscapes. Music was important to him throughout his life; he especially loved to listen to and play drums. Dale drummed and sang as an original member of the band “King Midas and the Muflers,” and never lost his love for listening to music - as often, and as loud as he could! Dale also loved family, and took particular joy in the lives and accomplishments of his children, grandchildren, nieces, and nephews. One of Dale’s greatest gifts was his ability to connect with people. He was an unassuming and down to earth man who loved to joke around. His authentic and playful outlook drew others to him. Throughout his life, he modeled resilience, problem solving, humility, the ability to admit one’s mistakes, and never giving up. Dale openly shared about the ups and downs of his own life making it easy for others to relate. He taught those in his life to never judge a book by its cover, to give and receive grace, and to value nature’s beauty over material possessions. Dale’s legacy lives on in these lessons. Dale is survived by daughters: Daisy Myrick (Steve) of Liberty, MO, Jennifer Mizell of Canton, KS, Angela Strovas (Tim) of Seattle, WA, and Elkie Burnside of Amherst, MA; four granddaughters: Mia and Molly Myrick and Grace and June Mizell; a sister, Cheri Wray of McPherson, KS; sister-in-law, Janet Frans of McPherson, KS and many extended family and friends. He was preceded in death by his parents, brother Dennis, and niece, Heather Lynn Frans. A celebration of Dale’s life will be held on October 18th, 2021, at 1 p.m. at The Presbyterian Church, McPherson, KS. Burial with Military Honors will follow at McPherson Cemetery. To view a live stream broadcast of the service, please click on the following link: https://youtu.be/b8-bt675leE Memorial donations may be given to The McPherson Housing Coalition, Oak Harbor Housing Project in care of Stockham Family Funeral Home (205 North Chestnut, McPherson, KS 67460).

Dale Gene Frans, 74 of McPherson, KS, passed away on Tuesday, October 12, 2021, after a courageous 9 year battle with Pulmonary Fibrosis. Ever a feisty and surprising man, he refused to be defined by the disease, living an active life for nearly... View Obituary & Service Information

The family of Dale Gene Frans created this Life Tributes page to make it easy to share your memories.

Dale Gene Frans, 74 of McPherson, KS, passed away on Tuesday,...

Send flowers to the Frans family.