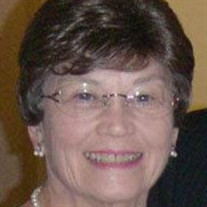 Not sure what to send?

Connie Jean Decker, of Issaquah, died peacefully at Swedish Medical Center-Cherry Hill in Seattle on Sunday, September 5, 2021. She was 85 years of age. Connie Decker was born on February 25, 1936 in McPherson, Kansas, the eldest daughter of Clarence and Bertha Tector. She was raised in Galva, Kansas, and graduated from Galva High School. Connie received a scholarship to Emporia State Teachers College, where she attended her freshman year. She later attended Lake Washington Vocational Technical School to receive Medical Secretary and Medical Assistant training. Connie worked in various fields, from a secretary at Air Force Contract Beech Aircraft Corporation in Wichita, Kansas to a medical office manager in Kirkland, Washington. Connie married her high school sweetheart Irvin B. Decker on August 26, 1956. Connie’s husband Irvin served as a pilot with the United States Air Force from June 1959 to July 1964. After leaving the Air Force, Irvin and Connie moved their family to Bellevue, Washington, where Irvin was employed as a Production Test Pilot with the Seattle Boeing Company. Connie was a devoted homemaker, raising her two daughters and volunteering with activities. She was a member of the Bellevue Newcomers Welcome Wagon Club, where she held the offices of Vice President and Secretary. She was also in a bowling league, Children’s Orthopedic Hospital Guild, and a Girl Scout Leader for her daughters’ Girl Scout Troop. Throughout her adult life, Connie loved playing bridge. Connie also took up plastic canvas needlepoint and enjoyed making Barbie furniture for her granddaughters. Connie’s four grandchildren were her pride and joy. She cherished the time she spent with her daughters and their families on six cruises to Alaska (twice), Hawaii, Mexico, the Caribbean, and New England & Canada. She also enjoyed traveling with Irvin on his Boeing trips to Europe, Australia and Asia. After retirement in 1990, Irvin and Connie spent three years visiting all 48 contiguous states in their motorhome. They also traveled to Iceland and Greenland, one of Connie’s favorite trips. More than anything, Connie loved playing games with her daughters and their families at family reunions. She was thrilled to finally meet her great granddaughter Peyton at the most recent reunion on Whidbey Island last Memorial Day weekend. Irvin and Connie moved to Providence Point, Issaquah in 1998. Connie made many new friends and enjoyed a variety of social activities, including bridge and hula dancing. Connie’s husband Irvin preceded her in death on June 13, 2010; Connie’s sister Shirley McKinney preceded her in death on October 4, 2020. Survivors include her daughters, Brenda Asheim of Carnation, Washington, and Carla Smith of Inver Grove Heights, Minnesota; two brothers, Larry Tector of Galva, Kansas, and Kendall Tector of Wichita, Kansas; four grandchildren, Tara Saunders, Brenton Smith, Christine Smith and Brandon Asheim; and two great grandchildren, Peyton and Cade Saunders. A private family graveside service and inurnment will be held at 10:30 AM, Saturday, March 26, 2022 at Empire Cemetery near Galva, Kansas. A public reception and Celebration of Life gathering will be held from 12:30 – 2:30 PM, Saturday, March 26, in the McPherson Opera House Grand Ballroom. The family suggests that memorial donations be given to the American Cancer Society in lieu of flowers.

Connie Jean Decker, of Issaquah, died peacefully at Swedish Medical Center-Cherry Hill in Seattle on Sunday, September 5, 2021. She was 85 years of age. Connie Decker was born on February 25, 1936 in McPherson, Kansas, the eldest daughter of... View Obituary & Service Information

The family of Connie Jean Decker created this Life Tributes page to make it easy to share your memories.