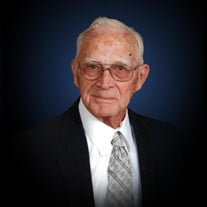 To view a livestream broadcast of the funeral service at 10:30 AM, Thursday, August 13, click on the following link: https://boxcast.tv/view/clayton-mears-funeral-service-uapcl0wosrhkxyf3rszw Clarence Clayton Mears, 87, of El Dorado, KS, passed away at Wesley Medical Center, Wichita, on Friday, August 7, 2020. Clayton was born on January 17, 1933 in Topeka, Kansas, the son of Van Milton Mears and Helen Viola (Jarvis) Mears as one of four children. After living in the Harveyville area, the family later moved to Enterprise, KS where he went to school and graduated from Enterprise High School. After graduation he started work with NCRA at the pipeline station near Enterprise. He later served in the U.S. Army with the 2nd Armored Division Headquarters stationed in Germany. Following his military service, he returned to Kansas, where he continued to work for NCRA but was transferred to the refinery in McPherson where he worked in both heavy equipment and the carpenter shop, retiring in 1995 after 44 years with the company. He met Betty Jean Thomas in 1957, and they were married in McPherson in 1958. The couple continued to live in McPherson and raise their two children – Brad and Sheryl. They celebrated 62 years of marriage on March 2, 2020. After retirement, he and Betty Jean enjoyed retirement on Beaver Lake in Northwest Arkansas, later moving to Rogers, AR; Webb City MO; and El Dorado, KS. He was a proud father, grandfather, and great-grandfather who was always willing to help a neighbor or friend with a carpentry project or providing vegetables from his garden. He was preceded in death by his parents Van and Helen Mears, brother Kenneth, sister Roberta (Decker), and brother Donald. He is survived by his wife Betty Jean of El Dorado, son Brad Mears (Diane) of McPherson, daughter Sheryl Dennett (Mark) of Valley Center, grandchildren David Mears (Erica) of Wichita, Elizabeth Mears of Wichita, Matthew Dennett of Valley Center, Andrew Dennett of Wichita, and Rachel Dennett of Valley Center, and great-grandchildren Oliver Mears and Houston Mears of Wichita. The family will receive friends from 5:00 PM to 7:00 PM on Wednesday, August 12, at Stockham Family Funeral Home. A funeral service will be held at 10:30 AM, Thursday, August 13, at Stockham Family Funeral Home followed by a graveside service at the McPherson Cemetery. To view a livestream broadcast of the service, click here: https://boxcast.tv/view/clayton-mears-funeral-service-uapcl0wosrhkxyf3rszw Memorials may be given to the McPherson County Community Foundation or the charity of your choice in care of Stockham Family Funeral Home, 205 North Chestnut, McPherson, KS 67460.

The family of Clarence Clayton Mears created this Life Tributes page to make it easy to share your memories.

To view a livestream broadcast of the funeral service at 10:30...

Send flowers to the Mears family.