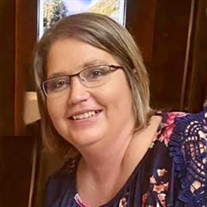 Cindy J. Guffey, 46, of McPherson, KS, passed away peacefully on Monday, October 11, 2021, surrounded by her family at McPherson Hospital. She was a daycare provider and later was the office manager at Overhead Door Company. Cindy was born on October 30, 1974, in Fullerton, NE, the daughter of Raymond and Connie June (Meader) Sowards. She graduated from Washington High School (Washington, KS) in 1993 and from Cloud County Community College (Concordia, KS). On November 4, 2000, Cindy was united in marriage to Brian J. Guffey in McPherson, KS. Cindy was a loving mother and grandmother to her children and grandson, a loving wife, an amazing daughter, and an aunt that any little kid would love to have. Cindy was a confidant and friend to all. She was selfless with her time and her money and was always wanting to help people out. She enjoyed chasing Katelyn around to her many softball games over the years. She was always crafting something, whether it was doing vinyl designs on t-shirts and cups or refurbishing old furniture. She loved going to Colorado on family trips; shopping, eating and seeing the sights. Probably her most memorable trip was with Katelyn for her graduation to Florida, spending time on the beach and seeing all that they could possibly see while they were there. Then, on the drive back, they stopped at multiple towns along the way to check them out. Survivors include: her loving husband, Brian of the home; daughter, Katelyn Guffey of McPherson, KS; son, Kane Guffey of Ellsworth, KS; mother, Connie Sowards of McPherson, KS; one grandson, Koda McFadden of El Dorado, KS; brother, Craig Sowards (Sandy) of Norton, KS; sisters, Marie Thayer (Steven) of Kearney, NE and Lacy Sowards of Sioux Falls, SD; father-in-law & mother-in-law, John & Kay Guffey of McPherson, KS; sister-in-law, Betty Laney (Josh) of Walton, KS; nieces & nephews, Wes Sowards (Jen) and their three kids of Pratt, KS, Bryan Sowards (Alli) and their fur baby, Rose, of Pratt, KS, Dusty Sowards (Shayna) and their four boys of Plymouth, NE, Darren Sowards of McPherson, KS, Rachelle Sowards of Manhattan, KS, Nichole Yianakopulos and son of Tulsa, OK, and Caleb Laney of Walton, KS; and many extended family and friends. She was preceded in death by: her father; grandparents, Vera Deloras and Vaughn Meader; uncle, John Sowards; and a nephew, Trenton Yianakopulos. The family will receive friends from 2:00 PM to 4:00 PM, Sunday, October 17, 2021, at Stockham Family Funeral Home. The funeral service will be held at 10:00 AM, Monday, October 18, at the First Christian Church with Pastor Lynn Scott officiating. Burial will follow at McPherson Cemetery. The family asks that those in attendance wear dress casual. To view a live stream broadcast of the service, please click on the following link: https://boxcast.tv/view/cindy-guffey-funeral-service-422410 Memorial donations may be given to the Cindy Guffey Memorial Fund in care of Stockham Family Funeral Home, 205 North Chestnut, McPherson, KS 67460.

Cindy J. Guffey, 46, of McPherson, KS, passed away peacefully on Monday, October 11, 2021, surrounded by her family at McPherson Hospital. She was a daycare provider and later was the office manager at Overhead Door Company. Cindy was born... View Obituary & Service Information

The family of Cindy J. Guffey created this Life Tributes page to make it easy to share your memories.

Send flowers to the Guffey family.