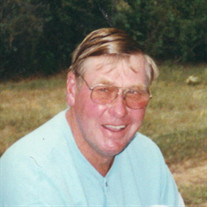 Charles “Charley” W. Johnson, 72, of McPherson, KS, passed away peacefully on Monday, December 11, 2017, at Pleasant View Home in Inman, KS. He had retired in 2010 from NCRA where he had worked in the Decoking Unit. Charley was born on April 6, 1945, in McPherson, KS, the son of Leland and Ethel (Heglund) Johnson. He graduated from McPherson High School in 1963. On November 25, 1966, Charley was united in marriage to Linda K. Chapman at the First Baptist Church, McPherson. She preceded him in death on June 9, 2010. He was a member of New Gottland Covenant Church. Survivors include: daughter, Lori Bontempi (Len) of Georgetown, TX; three grandchildren, Matthew Bontempi of Austin, TX, Dominic and Julia Bontempi, both of Georgetown, TX; three sisters, Sharyl Ensminger of McPherson, KS, Audrey Monson of Caldwell, KS, and Sally Chapman of McPherson, KS; four brothers, Jerry Johnson (Deanna) of Crete, NE, Daryl Johnson of Cannon Beach, OR, Lynn Johnson of McPherson, KS, and Steve Johnson of McPherson, KS. He was preceded in death by: his parents; wife; sisters, Debi Armer and Carolyn Parsons. The visitation will be held from 3:00 PM to 7:00 PM, Thursday, December 14, 2017, at Stockham Family Funeral Home with family receiving friends from 5:00 PM to 7:00 PM. The funeral service will be at 11:00 AM, Friday, December 15, at New Gottland Covenant Church with Rev. Richard Skar officiating. In accordance with Charley’s wishes, the family encourages everyone to dress casual for his service. Burial will follow at New Gottland Lutheran Cemetery. Memorial donations may be given to the Alzheimer’s Association or New Gottland Covenant Church in care of Stockham Family Funeral Home, 205 North Chestnut, McPherson, KS 67460.

The family of Charles W. Johnson created this Life Tributes page to make it easy to share your memories.

Send flowers to the Johnson family.