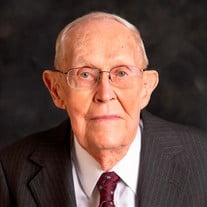 Stoic, loving, caring, and generous describe Carl Martin Gustafson. He was born on the Charlotte and Andrew Gustafson homestead to Rena Sallman and Anton Gustafson March 25, 1919. Carl was baptized and confirmed at Trinity Lutheran Church where he was a member much of his life, serving as an elder, deacon, and vice-chair of the church council. A special joy was co-chairing the building committee for the present facility built in 1970.

After graduating from McPherson High School in 1937, Carl pursued his lifelong passion for farming. In February of 1942 he was called to serve his country in the Pacific Theatre as part of the U.S. Army and U.S. Army Air Corps. Upon discharge in October 1945, he accepted a position at Swanson Electric. It was Valentine’s Day 1947 when Glen and Marjorie Lattin introduced him on a blind date to the love of his life, Trula Emma Steuber, a nurse at Asbury Hospital. Following a whirlwind romance, they married June 15, 1947. To this union were born three children – Steven Carl, Trudy Kay, and James Anton.

Vocationally Carl continued to farm part-time, worked as a machinist for Swick-Guth and later accepted a position at NCRA from which he retired in 1983. Carl and Trula took several trips to Europe, traveled extensively throughout the United States, and spent much quality time with their children and families. They enjoyed the fruits of their garden, were active in church activities, and relished time with close friends.

Following Trula’s death September 15, 2004, from Alzheimer’s Disease, Carl went daily to the McPherson Senior Center, continued as a member of Lion’s Club, and served the local VFW as chaplain for 21 years. Until one month ago, he lived independently, enjoying time with family and friends. On Saturday, August 31, 2019, Carl passed into his Savior’s eternal care.

Family will receive friends from 5:00 PM to 7:00 PM, Friday, September 6, at Stockham Family Funeral Home. The Service of Christian Burial will be at his church home, New Gottland Lutheran Church, at 10:00 AM on Saturday, September 7. Burial will follow in the McPherson Cemetery. Following the committal, family and friends are invited for lunch and fellowship in the basement of the church.

Memorials in Carl’s memory and honor are suggested to New Gottland Lutheran Church or Friendship Meals of the McPherson Senior Center in care of Stockham Family Funeral Home, 205 North Chestnut, McPherson, KS 67460. To send flowers or a memorial gift to the family of Carl M. Gustafson please visit our Sympathy Store.

To send flowers to the family in memory of Carl M. Gustafson, please visit our flower store.