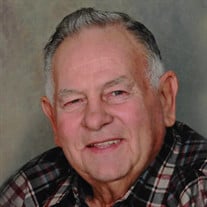 Blaine Virgil Cook, 79, of McPherson, passed away on Wednesday, July 12, 2017, surrounded by family at his home in McPherson. He retired from Wear Technology on June 3, 2005, where he was plant engineer and purchasing director. Blaine was born on January 1, 1938, in Mitchell County, Kansas, the son of Virgil E. and Bertha M. (Adams) Cook. He graduated high school in 1956 in Simpson, KS. On November 20, 1960, Blaine was united in marriage to Joleta Jean McClintock in Simpson, KS. She preceded him in death on February 12, 2017. He was a member of First United Methodist Church, McPherson. Blaine was a machinist, CNC programmer, and farmer. There wasn’t a machine that he couldn’t fix or figure out a better way to run. He could fix anything you brought him! He worked two jobs while raising his family and farmed on the side. He met a good friend, Dale Bandy, back in 1970 and began farming with him around Canton, KS that lasted 40 plus years. His passion was farming, working hard, and fishing. Family time was always fun with the go kart he built, camping, boating, flying his toy plane around the back yard, and playing cards with friends. The past three years had taken a toll on Dad. Losing the love of his life and taking dialysis three times a week had weakened him. We will miss his stories, laugh, calls that sometimes would begin with “How much rain did you get?” and “What are you doing on the farm today?”, and caring personality! He was a tough ole boot with the biggest heart! Survivors include: two children, Greg (Kim) Cook of Beloit, KS and Stacey (Galen) Deutsch of Chase, KS; brother; Wayne (Carol) Cook of Towanda, KS; sister, Elaine (Bud) McClintock of Salina, KS; four grandchildren that he adored, Samantha (Kalen) Smith, Cassidy Cook, Colten Deutsch, and Alyssa Deutsch; a great-grandson, Jackson Blaine Smith; and a nephew that he dearly loved, Darren McClintock. He was preceded in death by his parents and wife. Blaine’s deep love for his family, friends, fishing, and farming will live in our hearts forever. His laugh and caring personality will be missed deeply. He will be cremated and ashes will be scattered on his home place in Mitchell County. A visitation will be held from 3:00 PM to 7:00 PM, Tuesday, July 18, 2017, at Stockham Family Funeral Home with the family receiving friends from 5:00 PM to 7:00 PM. In lieu of flowers, memorial donations may be given to First United Methodist Church or National Kidney Foundation in care of Stockham Family Funeral Home, 205 North Chestnut, McPherson, KS 67460.

Blaine Virgil Cook, 79, of McPherson, passed away on Wednesday, July 12, 2017, surrounded by family at his home in McPherson. He retired from Wear Technology on June 3, 2005, where he was plant engineer and purchasing director. Blaine was... View Obituary & Service Information

The family of Blaine V. Cook created this Life Tributes page to make it easy to share your memories.

Blaine Virgil Cook, 79, of McPherson, passed away on Wednesday,...

Send flowers to the Cook family.