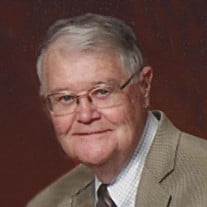 Billy “Bill” Ross Adams, 89, of McPherson, KS, passed away peacefully on Saturday, December 23, 2017, surrounded by family at The Cedars, McPherson. Bill was born on September 19, 1928, in Cherryvale, KS, the son of Thomas Roscoe and Ethel Mae (Gorden) Adams. He graduated from Cherryvale High School in 1946. After graduation, Bill served in the U.S. Army during World War II. On returning home, he attended Independence Junior College for two semesters and then worked one year in the Kansas oil fields as a roughneck. On December 28, 1950, Bill was united in marriage to Shirley Jean (Bussert) Schultheiss in Bentonville, AR. The next six years were spent in Cherryvale where Bill served as a building contractor, building houses and commercial structures. He and his family moved to McPherson, KS in 1957, when Bill entered the real estate business as a salesperson for the Duguid Agency. In 1961, Bill joined Bill Sheets as a partner in Sheets-Adams Realtors. He retired from being active in the real estate business in 1985. Bill was a member of First United Methodist Church where he served as Board Member and Trustee. He also was a member of U.N.I. Club and Tally HI. He was the Past President of McPherson Chamber of Commerce and served on the boards of McPherson County Crime Stoppers, McPherson Airport Authority, and McPherson Family YMCA. Survivors include: son, Johnny Schultheiss (Cheryl Barrow) of McPherson, KS; daughters, Deborah Hubbard (Gary Peak) of Wichita, KS, Jody Ramsdale (Marc) of Knoxville, TN, and Marsha Silver (Jim) of McPherson, KS; eight grandchildren, Candace Vogt, Nathan Schultheiss, Marsha Schultheiss, Cassey Peters, Jackie Tubaro, Ross Ramsdale, Adam Silver, and Samantha Silver; and six great-grandchildren. Along with his parents and siblings, Gordon Adams, Helen Altendorf, Lucille Allison, & Irene Morris, Bill was preceded in death by his loving wife, Shirley, who passed away on March 29, 2017. Bill never recovered from this loss and longed to be with her again. The funeral service date, December 28th, would have been Bill and Shirley’s 67th wedding anniversary. They are now together again to celebrate!! The visitation will be held from 3:00 PM to 7:00 PM, Wednesday, December 27, 2017, at Stockham Family Funeral Home with the family receiving friends from 5:00 PM to 7:00 PM. The funeral service will be held at 10:00 AM, Thursday, December 28, at First United Methodist Church, McPherson with Military Honors. The graveside service will be held at 3:00 PM, Thursday, at Fairview Cemetery in Cherryvale, KS. Memorial donations may be given to First United Methodist Church or McPherson County Crime Stoppers in care of Stockham Family Funeral Home, 205 North Chestnut, McPherson, KS 67460.

The family of Bill R. Adams created this Life Tributes page to make it easy to share your memories.

Send flowers to the Adams family.