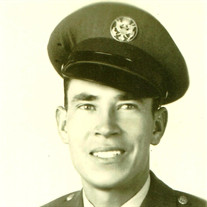 Arvid Richard Bengston was born on Sunday, Feb. 28, 1926 in a small hospital in Little River Kansas. He was the 3rd of 7 children born to William and Hildur Bengston. Once he started school, he &#8220;acquired&#8221; the name of Shorty because... View Obituary & Service Information

The family of Arvid R. Bengston created this Life Tributes page to make it easy to share your memories.

Send flowers to the Bengston family.