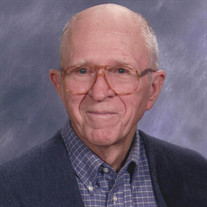 Arthur Paul Wagoner passed away on December 27, 2020, at Wesley Medical Center in Wichita, Kansas with family at his side. Paul was born on March 17, 1928, in Adel, Iowa to Ethel Maurine (Stine) and Claude Leslie Wagoner. Paul grew up in the Panther Creek Church of the Brethren. Church was an important part of family life for Paul as a child and in his adult life. Paul attended a country grade school and graduated from Adel High School in 1945. That fall, Paul came to McPherson College where he met Mary Metzler, who would later become his wife. Music and singing were always a part of Paul’s life. He sang in quartets, acapella choir, and with student deputation teams from McPherson College. Paul continued to sing solos in area churches and sang in different choirs throughout his life. Paul and Mary were married the day before college graduation on May 27, 1949. After one year of working for the Church of the Brethren Western District, they moved to Chicago, Illinois, where Paul attended Bethany Theological Seminary. During this time in Chicago, Jane was born in 1951 and John in 1952. After graduation from Bethany, Paul took his first pastorate at the Church of the Brethren in Larned, Kansas. This was a time when life-long friendships were made and two more children joined the family - Alan in 1953, and Bruce in 1955. In the summer of 1955, Paul was offered a position with McPherson College as Director of Alumni and Church Relations, and the family moved to McPherson. Paul enjoyed traveling with college groups and forming relationships with people throughout the central United States. During this time, two daughters were added to the family - Ann in 1959 and Frances in 1967. In addition to alumni and church relations, Paul held several other positions at McPherson College including Director of Financial Aid, Director of the Print Shop, and was on the Facilities Management staff when he retired in 1992 after 37 years of service to the College he loved. Paul was an active member of the McPherson Church of the Brethren where he taught Sunday school and served on the church board and deacon board. He served on the Church of the Brethren Western Plains District board, directed many summer church camps, and filled the pulpit in area congregations. He served on the board of trustees at The Cedars and was a member of Rotary. Upon retirement, Paul and Mary enjoyed traveling, volunteering in the community and the church, and spent time with family and friends. The Wagoner cabin in Colorado became a summer home for Paul and Mary where they entertained friends that stopped by as well as the endless stream of family that loved “the cabin”. Paul was a devoted husband and loving father to his family. Paul was preceded in death by his parents, Claude and Maurine Wagoner, brother, Don of Anaheim, California, sister-in-law, Ruth Wagoner of Perry, Iowa, brother-in-law, Lee Hogle of Conrad, Iowa, daughter-in-law, Deborah Hoffman Wagoner of McPherson. Paul is survived by his wife of 71 years, Mary; daughters, Jane Wagoner of Newton, Kansas, Ann (Dale) Jordan of McPherson, and Frances Wagoner of Twentynine Palms, California; sons, John Wagoner, Alan (Debra) Wagoner, and Bruce (Barbara) Wagoner, all of McPherson; 15 grandchildren: Christopher Wagoner, Daniel Wagoner, Dale Jordan III, Bryan (Kat) Jordan, Erica Roche (Ryan Robilio), Gerard Decina, Anna Wagoner (Hoyatte Harris), Elizabeth (Jeff) Krehbiel, Michael Wagoner, Stephen Wagoner, Sarah (Darren) Hendricks, Andrew (Sarah) Wagoner, Adam (Rebekah) Wagoner, Joel (Katie) Wagoner, Rebekah E. Wagoner; 17 great-grandchildren; sister, Donna Hogle, Ames, Iowa; brother, Richard Wagoner, Perry, Iowa; sister-in-law, Dolores Wagoner, Anaheim, California; numerous nieces and nephews. Services are pending. Memorials may be given to the A. Paul Wagoner and Mary Metzler Wagoner Scholarship at McPherson College in care of Stockham Family Funeral Home, 205 North Chestnut, McPherson, KS 67460.

Arthur Paul Wagoner passed away on December 27, 2020, at Wesley Medical Center in Wichita, Kansas with family at his side. Paul was born on March 17, 1928, in Adel, Iowa to Ethel Maurine (Stine) and Claude Leslie Wagoner. Paul grew up in the... View Obituary & Service Information

The family of Arthur Paul Wagoner created this Life Tributes page to make it easy to share your memories.

Send flowers to the Wagoner family.